Due to the Coronavirus WCPN NOW OFFERS TELEMEDICINE to all claimants.

Kicked, pummeled, taken hostage, stabbed and sexually assaulted … would you want a job that included these risks? In One of America’s Most Dangerous Jobs, the Washington Post’s Petula Dvorak shines a spotlight on the dangers in the nursing profession, specifically around the violence nurses encounter on the job. Citing a recent GAO report on violence in the healthcare profession, the article notes that, “the rates of workplace violence in health care and social assistance settings are five to 12 times higher than the estimated rates for workers overall.”

Here’s one excerpt from the article:

“In Massachusetts, Elise’s Law, which is named for the nurse who was attacked in June, is already on the fast track to set state standards for workplace protection. Legislators were working on this months before Wilson was stabbed.

Nurses in Massachusetts were attacked more frequently than police or prison guards. When association members testified about the violence epidemic this spring, they said nurses had been threatened with scissors, pencils or pens, knives, guns, medical equipment and furniture in the past two years alone, according to the Massachusetts Nurses Association.”

OSHA reports that in surveys conducted by various nursing and healthcare groups: 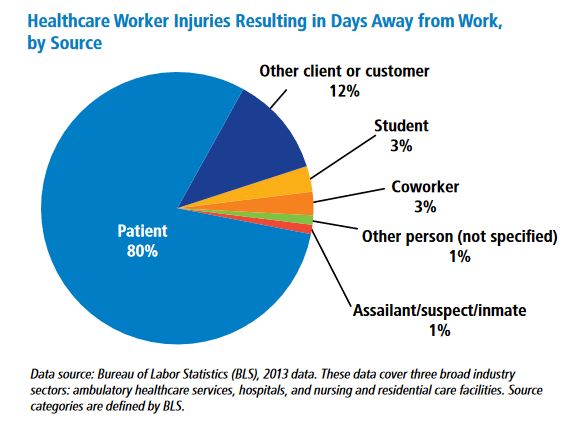 New Jersey is one of 26 states that have safety standards aimed at combating violence in health care facilities. The “Violence Prevention in Health Care Facilities Act,” enacted in 2008, lays out detailed requirements for hospitals (including psychiatric hospitals) and nursing homes. However, with more than 2,000 hospitals, nursing homes and health care facilities in New Jersey, there is ample opportunity for workplace violence to occur.

Notwithstanding the Act, at Workers Compensation Psychological Network, our clinicians are asked  to treat healthcare workers who are victims of workplace violence or abuse. The mental health complications of these injuries can leave lasting damage, which, if untreated, will only worsen over time. We advise claims adjusters and nurse case managers to pay particular attention to the possibility of a mental health comorbidity complicating a workplace violence injury.

NIOSH worked with various partners – including nursing and labor organizations, academic groups, other government agencies, and Vida Health Communications, Inc. – to develop a free on-line course aimed at training nurses in recognizing and preventing workplace violence. The course has 13 units that take approximately 15 minutes each to complete and includes “resume-where-you-left-off” technology. Learn more about the courses at Free On-line Violence Prevention Training for Nurses, and the actual course can be accessed here: Workplace Violence Prevention for Nurses CDC Course No. WB1865